Home » ARTICLES » Who will stand for farmers?

Who will stand for farmers?

Farmers gather in New Delhi to protest sugarcane prices.Holding sugarcane stems and shouting slogans, hordes of farmers from Uttar Pradesh arrived in Delhi Thursday to voice their protest against the new sugarcane pricing policy announced by the central and state governments. The farmers rally, including protesters from the Rashtriya Lok Dal (RLD), Bhartiya Kisan Union Tikait and Rashtriya Kisan Mazdoor Sangathan, started at the Ramlila ground and will culminate at Jantar Mantar in central Delhi. With thousands of farmers taking to the streets, Delhi Police has issued advisories asking people to stay away from central Delhi where traffic snarls were likely. 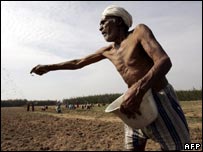 The central government has announced a price of Rs.129.85 per quintal for sugarcane during the 2009-10 crushing season under the Fair and Remunerative Price (FRP) system, while the Uttar Pradesh State Advisory Price (SAP) has been set between Rs.165 and Rs.170 per quintal. In case a state government fixes SAP higher than the FRP, it will have to pay the difference.

Farmers want Rs.280 per quintal for their produce. Ajit Singh of the Rashtriya Lok Dal, who led the farmers protest in the capital, said: "Sugarcane farming in Uttar Pradesh is dependent totally on diesel and the price of diesel is touching the sky. In such a scenario if the farmers do not get an adequate price for their produce, the agitation is completely justified." "Uttar Pradesh provides 40 percent of the total sugar in the country," he added. Another farmer added: "We will fight for our rights till the end. If we don t get the right price for our crop, we will make sure no grain comes to Delhi and block all incoming vehicles carrying milk, vegetables and grains."

Here we provided a copy of it just to help our students and readers (in public interest).