Global warming
(To download this Article Free, scroll down) 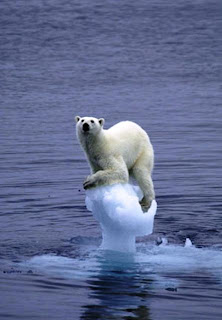 Global warming is the increase in the average temperature of Earth's near-surface air and oceans since the mid-20th century and its projected continuation. According to the 2007 Fourth Assessment Report by the Intergovernmental Panel on Climate Change (IPCC), global surface temperature increased 0.74 ± 0.18 °C (1.33 ± 0.32 °F) during the 20th century.  Most of the observed temperature increase since the middle of the 20th century has been caused by increasing concentrations of greenhouse gases, which result from human activity such as the burning of fossil fuel and deforestation.[] Global dimming, a result of increasing concentrations of atmospheric aerosols that block sunlight from reaching the surface, has partially countered the effects of warming induced by greenhouse gases.

Proposed responses to climate change include mitigation to reduce emissions, adaptation to the effects of global warming, and geoengineering to remove greenhouse gases from the atmosphere or block incoming sunlight.
The most common measure of global warming is the trend in globally averaged temperature near the Earth's surface. Expressed as a linear trend, this temperature rose by 0.74 ± 0.18 °C over the period 1906–2005. The rate of warming over the last half of that period was almost double that for the period as a whole (0.13 ± 0.03 °C per decade, versus 0.07 °C ± 0.02 °C per decade). The urban heat island effect is estimated to account for about 0.002 °C of warming per decade since 1900.[18] Temperatures in the lower troposphere have increased between 0.13 and 0.22 °C (0.22 and 0.4 °F) per decade since 1979, according to satellite temperature measurements. Temperature is believed to have been relatively stable over the one or two thousand years before 1850, with regionally varying fluctuations such as the Medieval Warm Period and the Little Ice Age.
Estimates by NASA's Goddard Institute for Space Studies (GISS) and the National Climatic Data Center show that 2005 was the warmest year since reliable, widespread instrumental measurements became available in the late 19th century, exceeding the previous record set in 1998 by a few hundredths of a degree.[20][21] Estimates prepared by the World Meteorological Organization and the Climatic Research Unit show 2005 as the second warmest year, behind 1998.[22][23] Temperatures in 1998 were unusually warm because the strongest El Niño in the past century occurred during that year.[24] Global temperature is subject to short-term fluctuations that overlay long term trends and can temporarily mask them. The relative stability in temperature from 2002 to 2009 is consistent with such an episode. 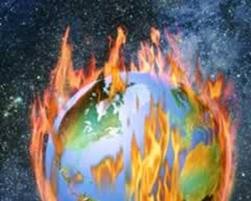 Temperature changes vary over the globe. Since 1979, land temperatures have increased about twice as fast as ocean temperatures (0.25 °C per decade against 0.13 °C per decade).  Ocean temperatures increase more slowly than land temperatures because of the larger effective heat capacity of the oceans and because the ocean loses more heat by evaporation. The Northern Hemisphere warms faster than the Southern Hemisphere because it has more land and because it has extensive areas of seasonal snow and sea-ice cover subject to ice-albedo feedback. Although more greenhouse gases are emitted in the Northern than Southern Hemisphere this does not contribute to the difference in warming because the major greenhouse gases persist long enough to mix between hemispheres.
The greenhouse effect is the process by which absorption and emission of infrared radiation by gases in the atmosphere warm a planet's lower atmosphere and surface. It was proposed by Joseph Fourier in 1824 and was first investigated quantitatively by Svante Arrhenius in 1896.[32]
Naturally occurring greenhouse gases have a mean warming effect of about 33 °C (59 °F).[33][C] The major greenhouse gases are water vapor, which causes about 36–70 percent of the greenhouse effect; carbon dioxide (CO2), which causes 9–26 percent; methane (CH4), which causes 4–9 percent; and ozone (O3), which causes 3–7 percent.[34][35][36] Clouds also affect the radiation balance, but they are composed of liquid water or ice and so have different effects on radiation from water vapor.

Global dimming, a gradual reduction in the amount of global direct irradiance at the Earth's surface, has partially counteracted global warming from 1960 to the present.[54] The main cause of this dimming is aerosols produced by volcanoes and pollutants. These aerosols exert a cooling effect by increasing the reflection of incoming sunlight. The effects of the products of fossil fuel combustion—CO2 and aerosols—have largely offset one another in recent decades, so that net warming has been due to the increase in non-CO2 greenhouse gases such as methane.[55] Radiative forcing due to aerosols is temporally limited due to wet deposition which causes aerosols to have an atmospheric lifetime of one week. Carbon dioxide has a lifetime of a century or more, and as such, changes in aerosol concentrations will only delay climate changes due to carbon dioxide
Variations in solar output have been the cause of past climate changes.[64] The effect of changes in solar forcing in recent decades is uncertain, but small, with some studies showing a slight cooling effect,[65] while others studies suggest a slight warming effect.[31][66][67][68]
Greenhouse gases and solar forcing affect temperatures in different ways. While both increased solar activity and increased greenhouse gases are expected to warm the troposphere, an increase in solar activity should warm the stratosphere while an increase in greenhouse gases should cool the stratosphere.[31] Observations show that temperatures in the stratosphere have been cooling since 1979, when satellite measurements became available. Radiosonde (weather balloon) data from the pre-satellite era show cooling since 1958, though there is greater uncertainty in the early radiosonde record.

WIKIPEDIA (Wikipedia.org)
Disclaimer: There should be a rigid understanding among the readers that the content available here is only for the purpose of providing academic help to our esteemed readers (students) and the same is originally available on wikipedia.org.
Posted by: Ruchi at 9:44 PM
Email ThisBlogThis!Share to TwitterShare to FacebookShare to Pinterest
Tags: ARTICLES
Share / यह जानकारी अपने मित्रों को भी भेजिए:
Newer Post Older Post
Loading...